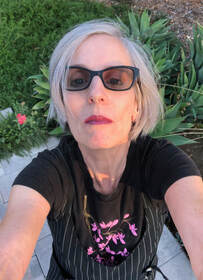 I am a fine artist, an educator, a collaborator, and an exhibitions director.  Since the early 80s, I have investigated a broad range of serious social and cultural issues preoccupying the American collective consciousness, often within the context of my own racially, ethnically, and economically mingled community of Northwest Pasadena and persistently through an intersectional feminist lens.

I often create new objects by re-purposing, and re-contextualizing existing objects, such as tents, grocery carts, and children’s play structures. I have exhibited my installations in the Los Angeles area–the Gamble House, Side Street Projects, the Armory Center for the Arts, the Brewery, the old LA County Jail, Pasadena City Hall, Police Station and Library, and Pasadena’s Lower Arroyo Park.
I am a Professor of Practice at the USC School of Cinematic Arts, Expanded Animation Research + Practice program, where I teach stop-motion physical animation and media-based, site-specific installation art. Additionally, as Exhibitions Director, I manage the program's events, academic conferences and student screenings on and off campus.
​
From 1995 to 2018, I served on the Board of Directors of NewTown Arts, an artist-run, non-profit organization dedicated to presenting multidisciplinary art forms in unconventional, Southern California locations. At NewTown, I co-curated and assisted with dozens of media, sonic, and installation exhibitions in alternative sites. I am the creator of NewTown's trademark Reels On Wheels, a mobile drive-in, experimental movie series.

In the early nineties, I helped form a collaborative group of women artists who are mothers, M.A.M.A. (Mother Artists Making Art). Our interdisciplinary art projects deconstruct motherhood and have been installed, performed and streamed in various Southern California venues.

I received my MFA in Experimental Animation from CalArts, and my BA in Art from Brown University. My graduate thesis film, Seven Lucky Charms, received a Student Academy Award (Silver, Experimental) and has been screened at numerous domestic and international film festivals. I received a Rockefeller Media Arts Fellowship, an Annenberg Foundation Independent Media Grant, a Brody Arts Fund Media Fellowship Grant, and several grants from the City of Pasadena Cultural Affairs Department for temporary public art projects made in  collaboration with the community.